MY BROTHER IS A SUPERHERO bu DAVID SOLOMONS, Review by Penny Dolan


I have to hurry with this book review, as I have promised to send the copy down to a certain nine-and-three-quarters year old boy. I'd bought the book to review, he started reading while we were staying with them - and he’d really like it back so he can continue. Which, in its way, is the best kind of review. 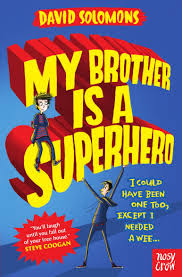 Eleven year old Luke Parker, comic book enthusiast and “ordinary” hero, gets down from their garden tree-house because he needs a wee – which is why Luke misses the moment when a good alien power visit Earth and bestows a blast of superpowers on his shy, studious fourteen-year-old brother Zak, as well as a row of three stars across his chest.

At first, Luke – the narrator - is outraged by the unfairness of this choice. Zak knows nothing about the world of comics! He refuses to wear anything more noticeable than a dark hoodie, spurning the star-patterned bathroom curtain Luke offers him as his superhero cape. Zak even needs Luke’s help to discover what his Superpowers might be:

The burning question was, could he fly? In my opinion, a superhero who can’t fly isn’t in the Premier League. So that evening I decided to find out.
“Hey, did you just try to push me out of the tree house?” said Zack, teetering on the edge of the doorway.
“No,“ I said. “Well, maybe a bit. I just wanted to know. Aren’t you curious?
“Not enough to jump out of a tree fifteen feet off the ground.”
I peered out investigatively. “You’re right,” I said. “It’s not nearly high enough.” I glanced across to the house. “We should go up on the roof.”
“Are you trying to kill me?” said Zack, backing away. “I bet that’s it. You’re still jealous that I got to be a superhero and you didn’t.”
He was right, I was still jealous and always would be. How could I not be? My brother was living my fantasy.

When Zak, as STARLAD, saves a toppling bus, Luke starts to worry about how long he can keep his brother’s other identity a secret, especially when STARLAD gets involved in more and more rescues. This situation is made worse when nosy Lara Lee, the would-be-journalist from his own class, starts a quest to unmask the new Superhero. Luke, still cross and jealous, has to pretend to join in her quest for the truth.

Luke, who knows how the superhero genre works, decided he must discover the identity of NEMESIS, the person from whom Zak is destined to save the world. A villain soon arrives: Christopher Talbot, who is the owner of the Crystal Cave comic book store chain and also a suspiciously over-ambitious robot inventor. Could Talbot be Zak's NEMESIS? Luke, Lara and his friend Serge think he must be, because Talbot certainly wishes to be the most powerful person on earth. He certainly won't want his schemes undone by STARLAD.

Just as we enter a  world of Scooby-Doo-like intrigues, mad machines and mysteriously secret settings, the true NEMESIS appears: a giant asteroid, destined to strike Earth. Will Talbot’s mighty fire-power stop the asteroid before - or as - those same weapons destroy the planet? And will STARLAD be free in time to fulfill his mission . . ?

Of course, the answer is obvious, but the title is more than a triumphant ending. One of the reasons I liked this book was because, among the jokes, the pace and the adventures, Solomons builds in a friendly, good-hearted feel to many of the "real" relationships. Luke, Zak and their parents live together as an ordinary family, getting along despite their grumbles and odd ways and annoyances. Luke and Zak do look out for each other (despite the Superpower thing) and Luke and his French friend Serge enjoy a quiet but trusting friendship, based on a sharing of each others interests and skills.

There is a boy/girl dimension: Luke and Zak are both aware and wary of girls. For example, Luke finds it simpler to explain Lara as a going-out-together girl-friend than to say the pair are working together - despite his mother's cooing reaction - while poor, love-struck geek Zak can’t even manage to speak to her big sister Cara Lee despite being STARLAD. Behind the joking and joshing, there's a kindness about the way Solomons shows all the personal conflicts, and there's a welcome thread about the building and rebuilding of relationships.

Later on, when the huge asteroid NEMESIS is about to hit Earth – which some readers might find quite scary – Solomons’ offers touching, almost reassuring descriptions of how many people behave on the Last Day, especially Luke’s family, keen to be loving to each other and to appreciate all the good things about their family life.

This book has, as well as the planets, robots and adventures, what I’d call a good soul, and that’s a fine thing for young reader to come across. there are also plenty of gentle superhero references, jokes and wordplay, such as when Luke disparagingly alters the name of “Zorbon the Decider” because he is in such a rage at his lost destiny. Of course, there's some silly toilet humour in the telling too, but it felt quite well balanced for the age of the reader: the plot was definitely more important.

Why did I opt for this particular title? I chose MY BROTHER IS A SUPERHERO because of what one could call literary osmosis. I half-heard something about a book about a boy who loves comics and was instantly alerted as its a love shared by certain young people I know. Only when I picked up the last copy in the shop that weekend did I discover the book had just won the Waterstones Children’s Book Prize 2016.

I was even more pleased when I found out that the story was set in the London suburb of Bromley, not only because I'd once lived near there but because of my very slight grudge against sudden “bestselling books” over here that turn out to be “best selling books from over there”, i.e. America.

I also feel fairly happy admitting this viewpoint as, towards the end of MY BROTHER IS A SUPERHERO, Solomons’ own scriptwriting background seems to feed into this view.

There’s a section where Luke, the younger brother (and ordinary hero) explains that he is telling the reader the true story of what happened. He knows the reader could be confused because when STARLAD's adventures became a movie, the American film company set it totally in the USA. Moreover - and one can almost hear Luke’s resigned sigh - he didn’t even appear on screen: the film company replaced him as his brother's side-kick with a cute puppy dog!

Luke is definitely a much wiser boy and the brothers are much better friends at the end of this enjoyably comic “Superhero” adventure and that’s how it should be. There’s also a great twist in the final scene.

That’s it, my review done, and I’m speeding off to the Post Office now, without even slipping on my starry curtain cape.
Happy reading!

MY BROTHER IS A SUPERHERO is illustrated by Laura Ellen Anderson. Published by Nosy Crow.Solomon’s next title, offering more adventures for Luke and friends, is MY GYM TEACHER IS AN ALIEN OVERLORD, out this July.

Return to REVIEWS HOMEPAGE
Posted by Penny Dolan at 13:14 Permalink