The Lie Tree, by Frances Hardinge: reviewed by Sue Purkiss

The Lie Tree, by Frances Hardinge, recently made headlines by winning the Costa Book of the Year Prize - the first children's book to have done so since Phillip Pullman's His Dark Materials. This is a richly complex Gothic horror story, with language and concepts as challenging as Pullman's. It is the story of Faith, a girl whose father is a vicar but also an archaeologist and natural scientist living at the beginning of the nineteenth century - a time when people (mostly, but not entirely, men) could be all these things at the same time; when the worlds of art and science were much closer than they are now; and when new wonders were constantly being discovered - and old certainties anxiously challenged. 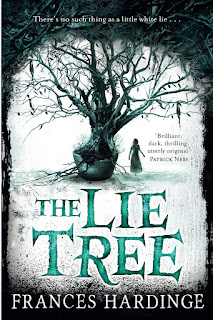 Faith's father is strict and distant, and dismissive of his daughter, even though she is clearly much cleverer than her younger brother, Howard. No-one tells her why the family must suddenly move to the island of Vane, but Faith is a curious girl who refuses to be limited by what is expected of her, and she makes it her business to find out what is going on.

She soon discovers that her father is fleeing from rumours that he is a fraud; that many of his most famous fossil finds are not genuine. She decides to investigate further - and she finds that at the centre of his obsessions is a mysterious tree which he has hidden in a sea cave. This tree, she eventually discovers, literally feeds on lies - and produces fruit which, when eaten, reveals hidden truths...

Meanwhile, the rumours about her father have reached Vane. Gossip spreads, and the atmosphere becomes as menacing and brooding as the swiftly growing tree. Faith decides she will harness the tree's power to find out the truth - but of course, when we go searching for the truth, we don't always like what we find.


The tree itself - well. Very sinister. There's something about this element of the story that reminds me of The Monkey's Paw, by WW Jacobs, which also features an object with mysterious powers found abroad, whose appropriation by westerners leads to unexpected and terrible consequences - as does Wilkie Collins' The Moonstone. Perhaps there's something to do with colonialism going on here - the downside of the urge to explore which led to so many adventures and discoveries from the end of the eighteenth century on.

I found this a compulsive, richly textured read, and you have to admire Faith's determination to confound expectations about what, in Victorian times, would have been appropriate for a girl in terms of life chances and behaviour. There are other interesting female characters too; her mother, Myrtle, seems fairly dreadful at first, but I very much warmed to her as she gradually revealed  unexpected depths of deviousness and determination.

For more reviews and other stuff, please see my blog, A fool on a hill.

Thanks for telling me more about this book. It's sitting on my bedside shelf so I'm pleased to have a good introduction.