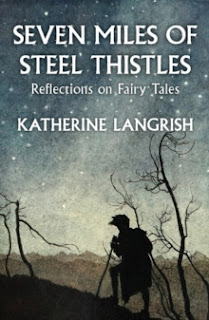 I wanted to take more time to read this lovely book, a collection (with amendments and additions) of Katherine Langrish’s posts in her blog of the same name. In fact, halfway through I paused to berate myself. If a book is as beautifully written and engrossing as this one, I told myself, you ought to relax, take your time, roll it around your brain for a while and make it last.

But by that time I was with the story of Briar Rose, the Sleeping Beauty, and Langrish was placing it in a context of stopped time, suspended animation, preserved moments. And I realised that it was fine to spend a hot and sunny afternoon doing nothing but immersing myself in this investigation of, and paean to, fairytales. So long as thorn bushes didn’t start growing up around the house, one gulp at one sitting was a perfectly good way to devour it.

Rescuing Sleeping Beauty from her reputation as the most passive heroine in storytelling is just one of the author’s feats. (I use the word deliberately; ‘Seven Miles of Steel Thistles’ is a description of an obstacle in a story of one of those rambling fairytale quests, but Langrish also likens it to the act of writing a book. I can totally relate.) She kills stone-dead the notion that fairytales are all about weak, passive princesses awaiting rescue; her retelling of the story of Mr Fox – a far more feminist folktale than Perrault’s Bluebeard –  is especially delightful, and I envy the schoolchildren who have heard her tell it live.

Langrish begins, though, with an analysis of what fairytales are, and where they came from, and the often blurred distinctions between fairytales, myths and legends. As she puts it in the introduction:

“The field of fairy stories, legends, folk tales and myths is like a great, wild meadow. The flowers and grasses seed everywhere; boundaries are impossible to maintain. Wheat grows into the hedge from the cultivated fields nearby, and poppies spring up in the middle of the oats…”

But Katherine Languish has a forensic approach to classifying them and clarifying the distinctions. It’s not about the fairies: plenty of fairytales have none at all. They’re not about characterisation, or intricate description, or even sane and logical plotting. These are stories most of all about ordinary people, their lives, their hopes and fears – albeit through the filter of weird metamorphoses and talking foxes. Fairytales “don’t ask to be believed”; but in the splendid chapter Desiring Dragons, Langrish declares that it’s our ability to think symbolically that makes us human. Far from telling children (and adults) they should grow out of Harry Potter, Langrish believes that “Myths and stories deserve to be taken seriously - read and written seriously - because there are things humanity needs to say that can only be said in symbols.”

Seven Miles of Steel Thistles is a wide-ranging journey through centuries – millennia – of these symbolic stories; as well as retelling and analysing fairytales from many cultures, Langrish gives us personal stories of her own love – begun in childhood – for these uniquely human creations. The chapters are punctuated by some of her own beautiful, sharp poems inspired by folk and fairytales. And she has done some fascinating detective work on the various versions of The Great Selkie of Sule Skerrie. It’s unsurprising that the original can’t be tracked down (though the journey is entertaining) – as she points out, there are no such thing as original folktales. We have no idea how they began – and one highly entertaining chapter (The King Who Had Twelve Sons) details how we sometimes don’t even know how they end.

I’m a huge fairytale nerd, so I guess it’s not surprising that I loved this book: one to make time stop on a hot, languid summer afternoon. I may have read it faster than I meant to, but I’ll be reading it again, very soon. It’s a story all of its own, and after all, that's what stories are for.
Seven Miles of Steel Thistles by Katherine Langrish; The Greystones Press; rrp £12.99
www.gillianphilip.com

I loved this book too. It's the most interesting work on fairytales I've ever read, and Katherine's love of these stories shines through.