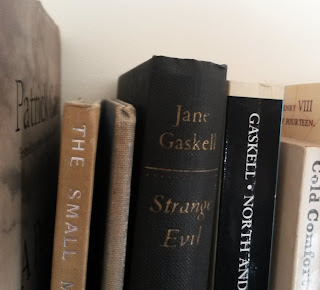 Strange Evil was written by fourteen-year-old Jane Gaskell in 1955 and published by Hutchinson two years later.

My own copy of this book has accompanied me from one home to another throughout most of my life. It was given to me by my parents on my fourteenth birthday, along with a second-hand typewriter and a ream of foolscap, in recognition of my determination to become a writer.

Imagine how inspiring it was, at fourteen, to be given a published hardback book written by a girl of my own age! And the book was amazing: a fantasy of travel between two worlds, of dangerous and beautiful fairies, and an epic struggle for survival. In my teens I read it many times, but until recently I had not re-read it for more than fifty years - though it has remained vivid in my memory.

So how did it measure up? Well, I could see at once why Hutchinson had felt they must publish it. In doing so they decided to leave the 'youthful sparkle' of Jane's writing largely unchanged. And sparkle it does! Jane had not only the imagination but the verbal power to bring her alien world and characters to life.

It's a typical fantasy story line: a beautiful unspoilt world - lush vegetation, fairy beings, satyrs and homely rustic folk - erupts into warfare. But the plot is complex, cleverly worked out, and you don't see what is coming. The best thing about the story is that Jane chose to tell it through the eyes of a mortal woman, Judith, who lives in a flat in central London and works as an artist's model. This is where the story begins and where the reader - along with Judith - is gradually drawn in.

Jane's writing at its best is powerfully visual, at its worst overwritten with strings of adjectives and adverbs and long, repetitive sentences. At times it does feel juvenile - especially where a love story thread is involved. The middle of the book is long, with far too much description and not enough action (though there is a certain cumulative impact, all the same.) But the beginning is well-written and well-paced - and the last few chapters have extraordinary power, with a finale that is impossible to guess.

Although Jane Gaskell went on to write a series of fantasy novels, she seems to have stopped writing novels after about 1977. According to sources on the internet, she has also worked as a journalist, a screenwriter and a professional astrologer.

Strange Evil and Jane Gaskell's other books are available on the internet - some with gorgeous covers!

What a wonderful present that was!